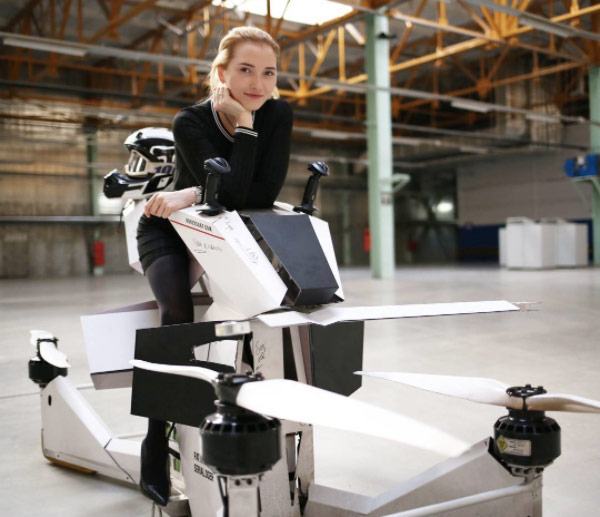 A Russian company called Hoversurf has displayed a hoverbike prototype known as the Scorpion-3 recently. The company specializes in manufacturing drones and the new prototype is a single-seat vehicle which is electronically powered. The company stated that the prototype is an extreme sports instrument, intended for both amateur and professional navigators. It combines a motorcycle with quadcopter drone technology.

Hoversurf went on to say that the design was inspired by ‘heavy-duty sport-utility motorbike frames and that the vehicle surfs through the air by changing altitude and direction. Hoversurf went on to say that riders will probably not require motorcycle or pilot licences to operate the vehicle but this is certainly unlikely to be the case in some countries like Malaysia and the US where special permits are required to operate drones.

The Scorpion-3 is similar to prototype models developed by other companies such as Malloy, Aeofex, Ehang, and E-volo. The Scorpion-3’s software limits its range and velocity to reduce the risk of injury to the rider. The original inventor of the hoverbike, Colin Furze, displayed his hoverbike last year and proved that it was capable of hovering for short periods of time.

The vehicle is already becoming commercially viable as shown by the US Department of Defence who recently announced a deal with UK company, Malloy Aeronautics, to develop models for the US army. Likewise Ehang has concluded a deal with the Road and Transportation Authority in Dubai to test its passenger ready drones over the city later this year. Other companies like Uber and Airbus have jumped on the bandwagon as well to develop prototypes of vehicles with similar applications to the hoverbike like jetpacks.