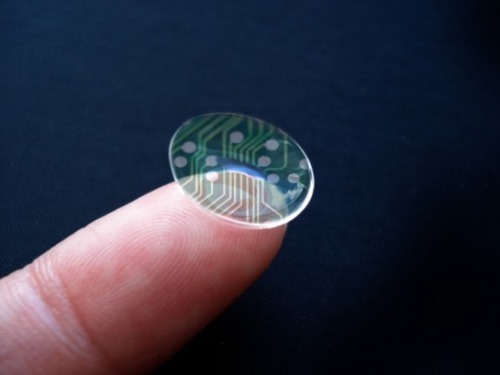 The Ocumetric Bionic Lens, which could potentially give people vision 3x better than 20/20, may become available to the public next year if all the clinical trials are completed soon. Invented by Dr. Garth Webb, an optometrist, the story broke in 2015 and is one of the most exciting developments ever in the field of eye care technology. Dr. Web is the CEO of Ocumetrics Technology Corp and spent over 8 years and about $3 million researching and developing the Bionic Lens, getting international patents, and acquiring a biomedical manufacturing plant in Delta, BC.

The lens looks like a tiny button in size and shape and inserting it into the eye is a short surgical procedure of about 8 minutes which is painless. The correction to vision is instantaneous and virtually permanent. Dr. Webb, who is based in British Columbia, Canada went on record saying that patients would have perfect vision and that all other visual aids like glasses, contact lenses, progressive lenses, and laser surgery would become obsolete in due course.

The Bionic LensTM is the product of extensive research and development and has the ability to auto-regulate within the eye, giving people superb vision at intermediate, near, very near, and far distances. Wavefront correction for higher order abnormalities found within the eye can now be sculpted into the surface of the bionic lens for further enhanced visual function. Dr. Webb stated that people who see a clock at 10 feet would be able to do so at 30 feet after the operation. The lens fold like a taco and are inserted into the eye from a saline-filled syringe. Once in the eye, they unravel within 10 seconds.  The procedure is an option for people depending on corrective lenses and who are over the age of 25 when their eye structures are fully developed.

They also have   the added bonus of preventing cataracts because the eye’s natural lenses, which degenerate over time, would be replaced by new ones. As eyes age, the lenses also undergo change, making them cloudier with a resulting loss of visual acuity. Toxic agents may also be released which have the potential to cause glaucoma and damage the cornea. The bionic lenses are constructed with biocompatible polymeric materials that prevent these adverse biophysical changes from occurring.

Dr. Webb had to have corrective lenses for his eyes by the time he entered the second grade and this fuelled his subsequent drive to get rid of them permanently. He presented his invention to some of the top ophthalmologists in San Diego in 2015, a day before an annual gathering of the American Society of Cataract and Refractive Surgery. There were several other meetings with international experts and the response was very positive. Some of them participated in the clinical trials that ensued on animals and blind people.

Currently, the Bionic Lens is ready for mass production according to a statement put out by Ocumetrics in June 2016. They have had to re-initiate the pre-clinical and clinical trials and are one year behind their original estimated time of arrival which was due in 2017. If the clinical trials are successful, the Bionic Lens will be available in Canada and elsewhere soon. Dr. Webb has also set up a foundation called the Celebration of Sight which will donate money to organizations providing surgery in developing countries. Funds will also be channeled to some of the best eye research institutes worldwide

Bionic lenses represent the next generation of eye correction care and have many advantages over existing technologies. They possess economy, durability, and outstanding optical resolution. Perfect vision is a blessing that might be taken for granted by those who have it.  For those who do not and who have the possibility of obtaining it, it is something to be deeply valued and appreciated. Bionic lenses have the potential to offer that gift in the near future.