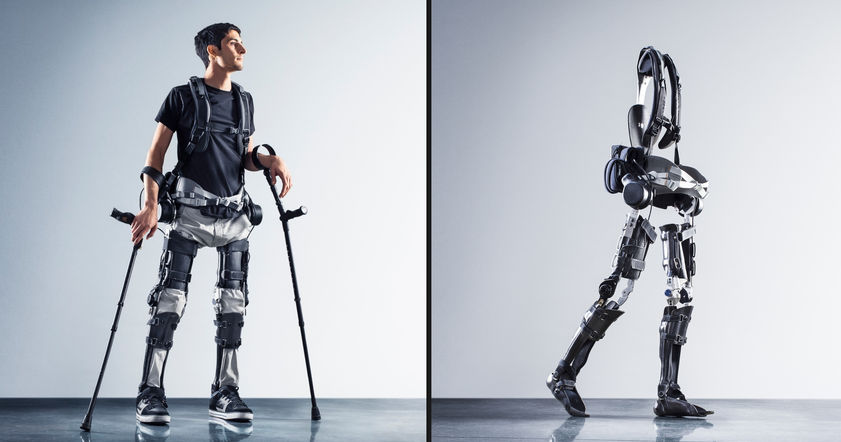 Able Bionics, a company based in London, Ontario (Canada) is offering the opportunity for paralytics to walk again when they thought they would never be able to do so again. They manufacture a ‘robotic exoskeleton suit’, which can help people to get out of their wheelchairs and stand on their own two feet. The company has several models, including one called Rewalk which was used to successfully help one of their clients, Lee Thibault, transform his life. He lost the use of his legs a few years ago in a motorcycle accident and now, with the help of Reewalk, is even able to play sports like sledge hockey not to mention learn how to walk again. Rewalk is designed for all day use around the house and for getting around in a town or city. Able Bionics also offer training to people in how to use the devices for independence and rehabilitation and Mitch Brogan, the man who founded the company, is a quadriplegic himself.

The suits are currently very expensive with a starting price of around $70,000 and are appropriate for people who have upper body control. They weigh about 50 lbs. The technology is continuously evolving however and will become increasingly accessible to people who need it in the upcoming future. There are other companies competing with Able Bionics. One is SuitX which offers an exoskeleton called the Phoenix which is both lightweight at 27 lbs and is custom-fit to the user’s body. It is priced at around $40,000 and has small motors which return movement to the customer’s knees and hips, enabling them to walk at a speed of 1.1 miles an hour through the use of push buttons integrated in a pair of crutches. It also has the advantage of being modular and adjustable so that it can be used to give mobility to one knee for example instead of both. The suit is powered by a backpack battery which can run for up to 8 hours and can be used with an app to track the patient’s walking data.

SuitX specialize in working with people with spinal injuries. CEO Kazerooni explained that, while the injuries could not be fixed, the effect of secondary injuries due to sitting could be postponed and consequently the suits gave the user both mobility and a better quality of life. He also stated that one of his main goals was to develop a version of the exoskeleton for children who need not necessarily be afflicted with spinal injuries. Those with neurological disorders for example sometimes need intensive walking training to avoid losing their mobility. Future applications for the suit could be for people who had suffered a stroke or motor injury.

The technology for the Phoenix suit was developed at the Robotics and Human Engineering Laboratory at Berkeley University, CA. More companies are likely to follow in the wake of SuitX and Able Bionics and the increasing competition will enhance performance and clinically proven benefit and drive down price to make them more affordable. Volker Bartenback, an exoskeleton researcher at ETH Zurich said that “Speed, operating time, mobility, and usability have to be good enough so that those systems are perceived as better by the users than the alternatives.” He pointed out that people would probably use a wheelchair instead if the suits were not demonstrably quick and easy to use.