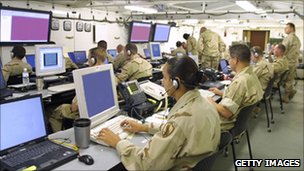 The United States government is building its own “scale model” of the internet to carry out cyber war games.

Several organisations, including the defence company Lockheed Martin, are working on prototypes of the “virtual firing range”.

The system will allow researchers to simulate attacks by foreign powers and from hackers based inside the US.

More than $500m (£309m) has been allocated by the Department of Defense to develop “cyber technologies”.

The National Cyber Range project is being overseen by the Defense Advance Research Projects Agency (Darpa), which was also involved in early network research that led to the internet.

When ready, it will function as a test-bed for defensive and possibly offensive technologies such as network protection systems.

Having a controllable mini-internet would allow researchers to carry-out experiments “in days rather than the weeks it currently takes,” Darpa spokesman Eric Mazzacone told the Reuters news agency.

Unlike the real internet, the in-house version could be wiped or reset between tests, explained Mr Mazzacone… Read More [via bbc]