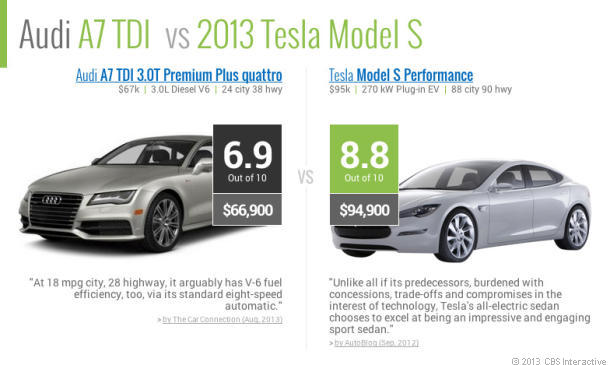 Tesla Model S or Audi A7? Toyota Prius or Nissan Leaf? New Web site RideNerd lets you compare cars to find out which are the least harmful to the environment.

Some years back, a now-discredited report titled “Dust to Dust” made the intriguing claim that, in a well-to-wheels analysis, the Hummer H3 was more environmentally sound than the Toyota Prius. New site RideNerd lets you pit just about any car versus another to find out which one has the green edge.

Beyond simply comparing fuel economy, RideNerd shows in-depth stats about each vehicle, including fresh water use and CO2 generation during manufacture.

The home page, at www.ridenerd.com, let me enter the cars to compare in two text boxes. A convenient lookup brought up a list of cars based on what I had typed. Below the entry boxes sit lists of type five cars by various categories and some preloaded comparisons, such as Dodge Dart vs. Honda Civic, VW Jetta TDI vs. VW Jetta Hybrid, and Lexus GS vs. Audi A7.

After hitting the compare button, the resulting page showed the cars’ RideNerd scores, highlighting the best in green. The RideNerd score is derived from subcategories scoring each car’s affordability, fuel economy, impact on air quality, and how its manufacture and use affects climate change. A number of factors go into each of those subcategories.

Farther down the page I found a computer-generated analysis of why one car might be better than another, and more-detailed specifications on each vehicle.

Pure electric cars versus hybrids or fossil fuel burners tend to win these matchups, but there are interesting details in the results. For example, even though the Nissan Leaf beats the Chevy Volt overall, manufacturing the Volt requires less fresh water… read more [via cnet]