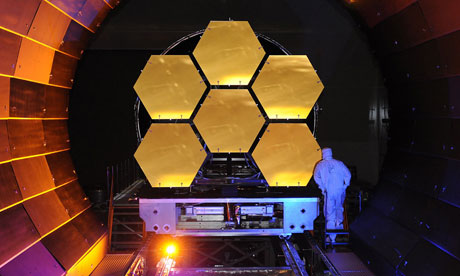 Nasa is fighting to save its next-generation space observatory, the James Webb Space Telescope. Politicians want to end the project – one of the most complex ever conceived by space engineers – even though billions of dollars have already been spent on its construction.

Scheduled for launch in 2016, the James Webb, intended to replace the ageing Hubble Space Telescope, would orbit in deep space, a million miles from Earth, and peer into the dawn of the universe. Its observations would answer major questions about the structure of the cosmos, say astronomers.

The cost of the observatory has soared from an initial estimate of $1.6bn (£996m) to more than $6.5bn (£4bn). As a result, budgets for other astronomical research projects have been slashed, leading the journal Nature to describe the James Webb as “the telescope that ate astronomy”.

Last week the US House of Representatives’ appropriations committee on commerce, justice, and science decided that it had had enough of these escalating costs and moved to cancel the project by stripping $1.9bn from Nasa’s budget for next year… Read More [via guardian]