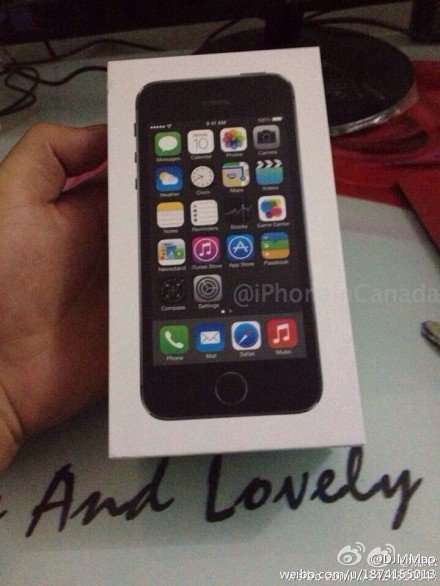 Several Apple blogs are passing around two images today that appear to show the packaging for Apple’s next iPhone, the iPhone 5S.

What’s notable about the packaging is the phone’s home button. Instead of the normal square-within-a-circle design, the image on the packaging shows a home button with a white ring around it. Most speculate that this could be the rumored fingerprint sensor for the iPhone 5s.

Now for a quick reality check. The photos are bit fishy because the iPhone image on the packaging has a plain black background for its wallpaper. Apple usually shows an iPhone with a colorful wallpaper on its packaging.

We also don’t have confirmation that the next iPhone will be called the iPhone 5S. However, most think it will be called the iPhone 5S because the new device is said to look the same as the current iPhone, but it will have some internal improvements like a faster processor and better camera. Historically, Apple has tacked an “S” onto the name of its iPhones that don’t have a brand new design. (See: iPhone 3GS and iPhone 4S)

Finally, there’s only limited evidence that the next iPhone will have a fingerprint sensor.

A fingerprint sensor would take away the need to input a special passcode to unlock your phone. Instead, you’d just have to swipe your finger over the home button.

Apple will announce its next iPhone at an event on Sept. 10.
Read more: http://www.businessinsider.com/iphone-5s-home-button-ring-2013-9#ixzz2eGNNkadV