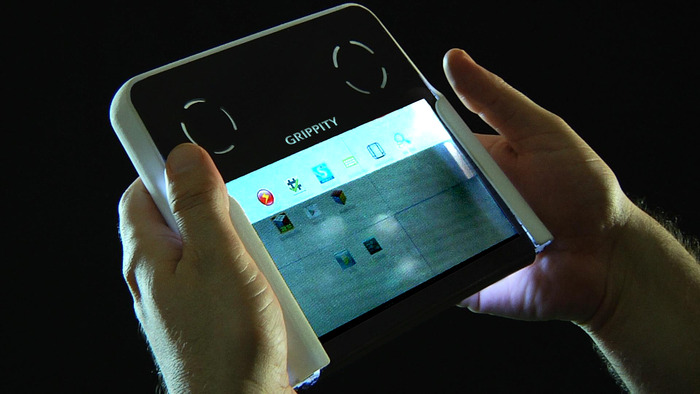 Back in 2010 a typing device was announced called the Grippity 1 which promised to change the way we type. Instead of the usual keyboard interface what we have is a back typing keyboard that might get a lot of time to get used to. Fast forward to today and we learn that its creators have taken the keyboard concept to a tablet.

Grippity is currently a project over at Kickstarter that aims to become the world’s first transparent Android tablet. It still retains the dual-sided touch interface and even brings in more features.  It is described as “Grippity is a totally new way of looking at input – A transparent, dual sided multi-touch display that enables you to lean back in your most comfortable chair (or even stand or lie down) and use ALL TEN fingers, while keeping your palms at a neutral ergonomic posture. It also enables you to accurately touch (the back of) small menu items and buttons on websites and software that were originally designed for desktops. As Grippity is running Android, you can download or develop apps for your specific needs.”

Grippity can be used as a tablet, remote control, game controller, and media center keyboard. You decide how you are going to use it as it can perform each function very well.

To create a transparent LCD the designers simply took out the opaque parts of the backlight. You won’t be getting a bright LCD because of this but then you’ll be enjoying a transparent display.. See more at thedroidguy