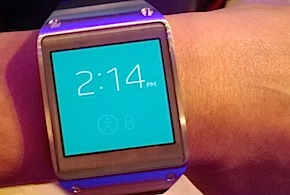 Samsung’s entry into the mainstream wearables market will begin Oct. 1, when AT&T begins shipping the Galaxy Gear and Note 3.

The Samsung Galaxy Gear is coming.

It appears that AT&T will be the first to offer the Samsung smartwatch. The carrier is now accepting preorders online and promising that the accessory will ship Oct. 1.

Available in beige or black, the Gear is priced at $299 and is a companion device to the Galaxy Note 3—a phablet with a 5.7-inch display that AT&T began accepting preorders for Sept. 6 and also promises to ship Oct. 1.

With a two-year contract, the Note 3 is priced at $299.99 and offered in Classic White or Jet Black. (Introducing the Note 3 at simultaneous press events in Berlin and New York City Sept. 4, Samsung also showed off a blush-pink version.)

Alternately, through AT&T’s new Next program, users can pay $35 a month for the device (the data plan is separate) for 20 months.

T-Mobile will follow a day later, selling both the Galaxy Gear and the Note 3 Oct. 2.

The “un-carrier” is selling the Note 3 for $199 down and 24 payments of $21 with a Simple Choice Plan. (There’s no two-year service contract, but if you cancel your Simple Choice Plan, you’ll have to pay the remainder that’s due on the phone; same goes for AT&T’s Next.)

T-Mobile will begin accepting preorders for the Note 3 Sept. 18.

The Galaxy Gear will sell for $299.99, plus taxes and fees (no un-carrier business there), and interested parties will need to wait until Oct. 2 to place their orders.

Third in line, Verizon is now accepting preorders for both devices, which it says it will deliver by Oct. 12.

Verizon is offering the Note in black only and the Gear in choices of black, gray or orange.  – See more at: eweek