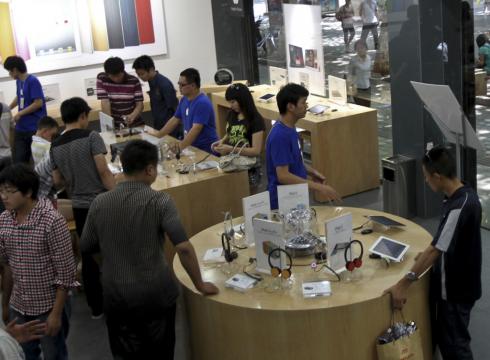 BEIJING — In millenniums past, China developed the compass, gunpowder and papermaking, among multiple inventions that have shaped world history. In recent years, it has grown infamous as counterfeit central, from fake films to bootleg bags, and from Disney characters to DuPont chemicals.

Now some business people here are copying not just the products of hot Western brands, but the entire store, too. In the southwest China city of Kunming, officials found five Apple stores last month, including one near flawless “branch,” yet none were authorized by the U.S. electronics company. Another fake Apple store operates in Chongqing City, the China Daily newspaper reported.

A photo exposé posted by an American expatriate blogger in Kunming recently became a global Internet sensation and prompted the government’s own belated inspection. For those in the front-line fight against China’s pirates, these bad apples taste all too familiar.

“You get everything from McDonald’s and Starbucks lookalikes to whole hotels copied,” says Chris Bailey, a China-based executive at intellectual property consultancy firm Rouse. “It’s pretty normal, not just the look and decoration but … fake certificates too, and good enough to fool people,” he says. And why so brazen? “The penalties don’t outweigh the benefits.”.. Read More [via usatoday]