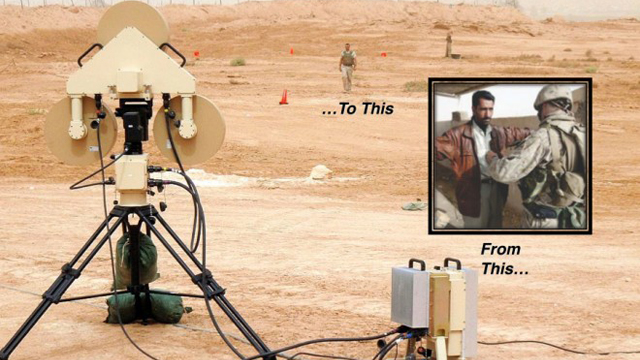 Lena Groeger – Wired — The security at Kabul’s Intercontinental Hotel wasn’t nearly enough to stop nine suicide bombers from setting the place ablaze and killing 12 people last month. But the U.S. military thinks it can do better – by spotting treacherous individuals before they get close enough to cause serious harm. Meet the CounterBomber.

The Army just awarded Science, Engineering and Technology Corporation (SET) an up to $48.2 million contract for a machine that could spot bomb-toting individuals from afar. The Virginia-based company, owed by SAIC, has already sent the CounterBomber to over 40 locations in Iraq and Afghanistan.

So just how does this $300,000 device catch would-be human explosions at a distance? Two video cameras automatically detect and track individuals walking anywhere near the system, within the range of a soccer field. Low-level radar beams are aimed at them and then reflected back to a computer, which analyzes the signals in a series of algorithms.

“We call it our ‘secret sauce,'” says Rick Thornton, the director of business development at SAIC. That sauce is apparently so potent it can spot signs of bombs or weapons hidden under someone’s clothing… Read More [via gizmodo]