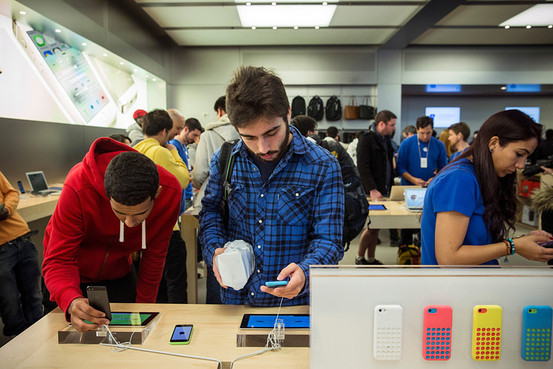 Apple Inc. may have a hit with its new iPhone 5S, but prospects for the lower-price iPhone 5C are less clear.

Those conclusions emerged after Apple said Monday that it sold nine million of the two handsets in their first three days on the market—well above what analysts had anticipated.

The company also said that its quarterly sales and profit margin would likely be at the high end of the company’s previous forecast. Apple in July projected revenue between $34 billion and $37 billion and gross margin between 36% and 37%.

Apple also said that more than 200 million of its devices already were running iOS 7—a free overhaul released last week of the operating system used on iPhones, iPads and iPod Touch devices.

Apple’s record volume for the new iPhones compared with five million iPhone 5 models sold on its opening weekend a year ago. Analyst had predicted that six million to seven million of this year’s models would be sold in the debut weekend.

But there are caveats with the Apple figures, among them the decision to sell the phone in China in the opening weekend this year.

And beyond sales by the company to consumers from its own stores and website, Apple’s count includes sales to other retailers. While Apple appears to have exhausted inventory of the iPhone 5S, the nine million units include unsold iPhone 5C models at non-Apple retailers, analysts said.

“If you adjust for the 5C, it’s not the blowout that it initially looks like,” said Gene Munster, an analyst at Piper Jaffray. He estimated that three million to four million iPhone 5C models are with retailers and that the number of both handsets in the hands of consumers was 5.5 million. See more at: wallstreetjournal