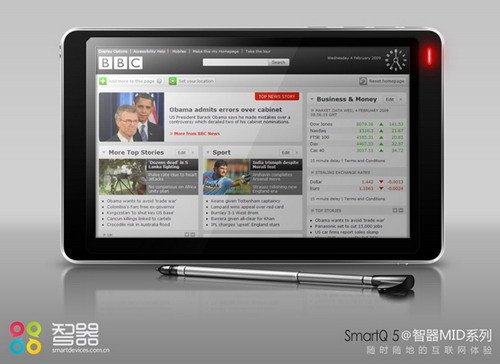 SmartQ has been one of the more visible Chinese companies in the market. Their latest announcement, the SmartQ MID, sends a clear message to industry watchers: SmartQ means business. The SmartQ 5 may be a little too late to compete with the COWON Q5, nevertheless it is unmistakable the two devices have many features in common. The SmartQ MID has a smaller 4.3-inch touchscreen but resolution matches that of the Cowon Q5 at 800 x 480 pixels. Like the Q5, the SmartQ 5 has WiFi, Bluetooth and even GPS via USB. No 3G though on both devices. If you remember how pricey the Q5 was when it was announced, it would be best to expect a shocker when SmartQ 5 turns out to be fairly affordable.
MID products available is not long, but has shown strong competitiveness as the mobile Internet equipment, a great substitute for the Internet and smart phone trend. NEW MID-chi browser SmartQ 5 just one exposure to attract the vast number of consumers on the eyeball. Then, as a standard of MID products, what the notable features of it? MID Products from MP4,this as well as those old-fashioned PDA / PPC, and what “unique ability to” do?
[via PMP Today via zol]