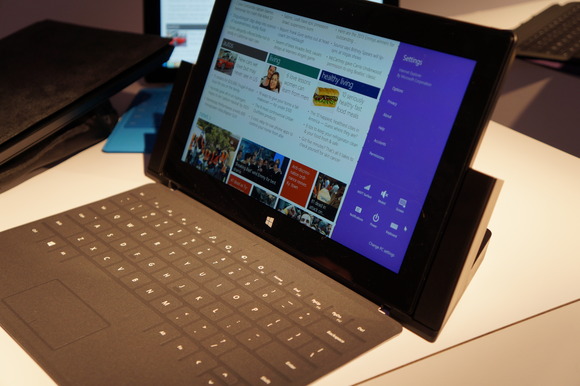 Microsoft launched the next-generation Surface 2 and Surface 2 Pro at an event in New York City on Monday, pairing them with a number of new covers and other accessoriesdesigned to enhance the functionality of the basic Surface experience. The basic message is that Microsoft has enhanced the Surface with additional performance, while extending battery life and slimming down the tablet’s overall profile with skinnier covers.

On the first count, Microsoft certainly appears to have succeeded; the addition of an upgraded Core processor to the Surface Pro 2 undeniably improves the tablet. A quick hands-on with both the new Touch and Type Covers leaves me thinking that Microsoft has taken a step back with its portable keyboards, however.

The original Surface Pro conked out under heavy load in just 2.5 hours or so, though lighter Web browsing and battery management could push it out a couple more. One Microsoft employee we talked to felt that the new SurfacePro 2 could pull five hours under heavy gaming. (With the new Power Cover, battery life will be extended to ten-plus hours.) A more formal review will settle the difference.

What is clear, however, is that the Surface Pro 2 is definitely a gaming machine of some sort. Microsoft showed off World of Warcraft and Portal 2 running smoothly—yes, these games are several years old, but they do run, and well.

Still, numbers generally don’t lie. I slipped in a USB key with FutureMark’s PCMark 7 suite (the Surface won’t run a test or two in or more recent WorldBench 8 and 8.1 tests). We re-benchmarked the original Surface Pro (128 GB/4 GB RAM) and generated a score of 4,447. The new Surface Pro 2 (256 GB/8 GB RAM) returned a score of 4,888 using the identical benchmark—just 9 percent better. That’s not earth-shattering, but we are talking about generational improvements from one set of integrated GPUs to the next.

Since our tests are confined to x86 processors, we didn’t benchmark the ARM processor-based Surface 2. It felt speedy enough, but that’s a very basic impression. See more at pcworld