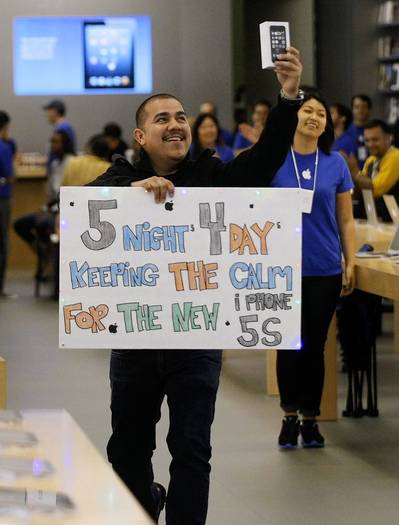 SAN FRANCISCO — In what has become an annual ritual of the digital age, thousands of exuberant loyalists lined up outside Apple stores around the world to be among the first to buy the company’s new iPhones.

The atmosphere in the lines ranged from festive to tense as fights broke out at one store in Pasadena where a man hired homeless people to save spots in the waiting line. Many fans were also destined to be disappointed as several phones, particularly the highly coveted gold iPhone 5s, were in short supply and ran out within minutes of doors opening at 8 a.m.

“Everyone here wants the gold iPhone,” said Jorge Pinell, 19, a City College of San Francisco student waiting in line at a San Francisco store. “But it ain’t going to happen.”

The silver and space gray iPhone 5s units also were reportedly in short supply. Once they became available for sale online after midnight, Apple’s website said orders for the iPhone 5s might not ship until October.

Apple had hinted in the last week that it would have trouble meeting demand for the higher-end iPhone 5s, which features a fingerprint scanner, faster processor and upgraded camera. The company did not allow consumers to pre-order the phone online as it did with the cheaper iPhone 5c, which has a plastic case and comes in five colors.

Last year the company had similar problems meeting demand for the iPhone 5, with some customers waiting several weeks before their phones arrived.

Rumors of limited availability led Chris Lo, 24, a product developer, to get in a line Friday morning that stretched to 400 people outside Apple’s San Francisco store in Union Square.

“Last year we just swooped in a few hours after the iPhone 5 went on sale and bought one,” Lo said. “But we heard this year they were going to be in short supply.”

The new gold iPhone 5s proved especially hard to find. Some stores apparently were given only one or two units, and word spread quickly that they were out of stock.

Thanh Nguyen, 27, a student at UCLA visiting his family in San Francisco, was one of the few people to get a gold iPhone 5s on Friday at the Union Square store.

That was because he was the first person to line up — at 2 p.m. Thursday. Last year, people lined up four days in advance of the iPhone 5 release.

Nguyen stood grinning, wearing an orange promotional shirt a company had given him, as the clock ticked closer to 8 a.m. Apple store employees started handing out cards to people in line. The cards indicated which phone they would buy.

When he came out of the store a short time later, Nguyen was surrounded by reporters as he tore open the box and held up the rare gold iPhone 5s.