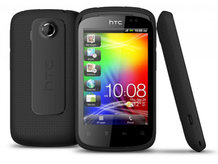 HTC has whipped a new budget phone out of the bag, with the HTC Explorer bringing a rubberised back and mid-range specs to the table.

Toting a 3.2-inch HVGA touchscreen and 600MHz processor, we’ll forgive you for not cracking out the bunting and dancing excitedly in the streets over this one.

But the HTC Explorer does come with cutting edge Android action; it’s rocking Android 2.3.5 and Sense 3.5, although its meagre processing power means you’ll have to make do without some bits and bobs.

This means no HTC Watch movie rental service and no 3D scrolling effects on the homescreens – but we’re sure you can live without those.

You can console yourself with the 3MP rear-facing camera nestled comfortably on the rubberised back of the handset.

The HTC Explorer UK release date is set for some time in Q4 quarter (so, by the end of the year) with the handset coming in black or navy colour options.

Three has already announced its intentions towards the Explorer, with UK pricing yet to be revealed… Read More [via techradar]