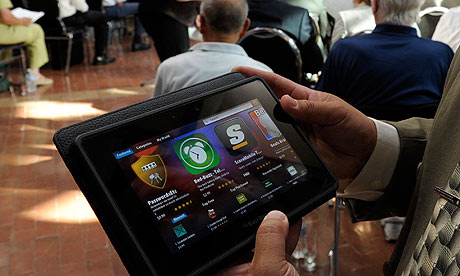 BlackBerry maker Research in Motion co-chief executive Jim Balsillie says the company plans to launch seven new smartphones running its next-generation operating system in coming months – but admitted to shareholders that the company faces challenges as it tries to hit that target.

Speaking at RIM’s annual meeting on Tuesday, Balsillie said that there had been delays in releasing the new OS, but that the new phones would enable RIM to stay on track to meet its financial guidance for the year.

Analysts have been doubtful that the company can meet its ambitious full-year guidance after a dip in profits in the last quarter, and RIM’s share price has fallen more than 50% this year, to its lowest point since August 2006, before Apple’s iPhone was launched. The company is presently valued at just $13.6bn (£8.5bn), compared to its August 2008 high of $75.2bn.

Mike Lazaridis, who shares the title of co-CEO with Balsillie, said the delays were due to company’s efforts to get its smartphones to meet market expectations, adding that the technology in the new BlackBerry Bold jumps a generation. “It may have delayed us, but we are going to come out ahead,” Lazaridis said, adding that the delay would bolster RIM in the face of what he called an “arms race” brewing among its smartphone competitors… Read More [via guardian]