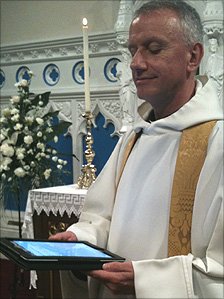 A parish priest is turning heads by using the latest technology to help communicate with his flock.

The Church in Wales priest said the device also helped him to personalise services, particularly weddings, baptisms and funerals.

His tech-savvy approach impressed guests at a recent wedding at St Mary’s in Marshfield, near Newport.

Father Matthews, 50, parish priest for Marshfield and St Brides Wentlooge, said: “For about 10 years I’ve been interested in technology. I jokingly refer to myself as Father Gadget!

He said he prepared for a mid-week service by putting various readings and prayers into his iPad.

“I tend not to use it at the altar, I use the prayer books, but I tend to use it more at the lectern,” he added.

He said he had downloaded several applications, or apps, that were useful such as daily prayers and translations of texts from scriptures… Read More [via bbc]