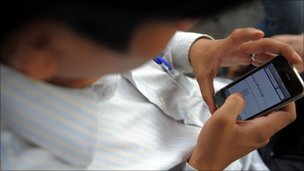 New rules aimed at reducing the price gap between using a mobile phone at home and elsewhere in the EU have been proposed.

The European Commission wants to cut “roaming” costs – when calls are made or received, text messages sent or data downloaded when travelling in Europe.

New, lower price caps could come into force in stages to July 2014.

By then, mobile phone customers would also be able to separate their national and overseas contracts and shop around.

They would still be able to use their same phone number, but could switch to a separate operator when in another country for a cheaper deal for surfing the web or downloading music or photos.

At present, mobile users can buy a Sim card local to the country in which they are travelling, but this means they are on a different phone number to usual.

The Commission hopes that more “virtual” operators, which do not have their own networks, would enter the roaming market. The extra competition would then be expected to push down prices.

How to keep phone costs low

The European Commission is planning to cut costs for mobile users, but what more can be done to keep bill costs low?

Turn off data roaming. If you switch off the service on your phone which allows you to check e-mails or access websites when you are away from your home network, it will prevent you racking up big bills.

Consider buying a local Sim card. This can be even more useful when travelling outside Europe, although you will need to let people know your new, temporary number. You need to ensure your phone is unlocked.

Consider texting. It can be cheaper and you can easily control the size of the text, rather than worrying about how many minutes you have been speaking for.