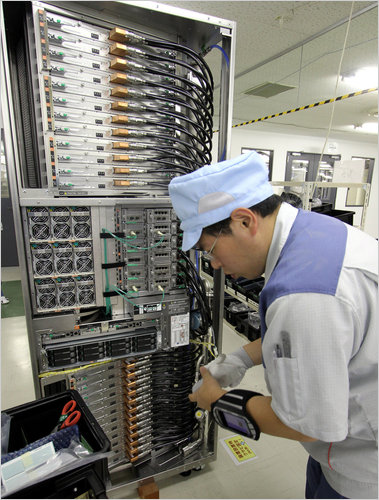 The computer, known as “K Computer,” is three times faster than a Chinese rival that previously held the top position, said Jack Dongarra, a professor of electrical engineering and computer science at the University of Tennessee at Knoxville who keeps the official rankings of computer performance.

K, built by Fujitsu and located at the Riken Advanced Institute for Computational Science in Kobe, Japan, represents a giant leap forward in speed. It will also undoubtedly be a source of national pride for Japan, at least among computer scientists, who take the race for fastest computer quite seriously.

The latest ranking of the top 500 computers, to be released Monday, is determined by running a standard mathematical equation. The winning computer was able to make 8.2 quadrillion calculations per second, or in more technical terms, 8.2 petaflops per second… Read More [via nytimes]